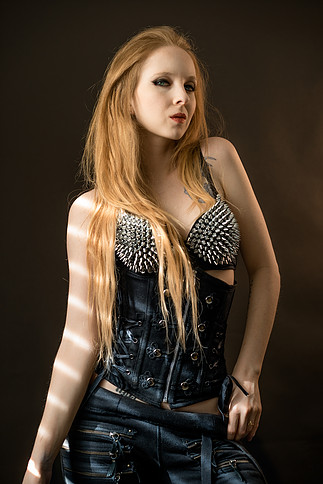 The next piece of our biography series is about a lovely young singer, Infy Snow.

Infy originally called Adi Berman was born in the Netherlands but moved to Israel with her family at the age of four so she grew up in Kibbutz Yotvata. She has been attracted to music from a very early age and started writing her own songs as a teenager.

Despite being passionate about music she was a shy girl and has long ceased her singing in front of others. When she debuted in a local theater at the age of thirteen she surprised everybody, even her parents because her having been silent up to that point no one knew how well she could sing.

Her debut album titled A Mortal’s Tear was released in 2015 and she has become the lead singer of the band Soul Torture the same year.

In the next part Infy will tell us about her youth, her musical carrier and her personal life. We thank her for her cooperation!

When did you started singing? Was there a point in time when you decided that you wanted to be a singer?
I started singing as soon as I started talking, so pretty much my whole life! It was after I started working with Omri Lahav on my debut album however, that I realized this is what I want to do in my life and not merely as a hobby.

How did your family feel about your connection with singing? Did they supported you and your dreams?
My family always loved my singing and supported it as a hobby, but when I wanted to have my life revolve around it- they became anxious. They worried that I won’t be able to support myself and encouraged me to aim to the academia, as I had dreamt before I considered singing as a plausible option. Thankfully today they see that I manage well and joyously live my dreams and they are happy for me.

When and how did you get to love rock/metal?
I grew up in quite an isolated town-like place that is also extremely small, called ‘Kibbutz Yotvata’. I was a lone-wolf there, didn’t have many friends and spent most of my time alone in my room. I haven’t even heard the word “metal” in relations to music until I was 13. My musical knowledge didn’t extend much further beyond what I heard at home or the kibbutz, but being the little rebel that I was I found myself drawn to the rock tunes that my dad had loved, and the pop music I loved the most had to have some distorted guitars and noticeable drums.
Then I got to know my best friend, Daniel, who is today my partner in life; he is the one who introduced me to the heavy tunes in which I immediately fell in love.

How and when did you start your solo career?
As a teenager I wrote many songs (many of them actually feature on my A Mortal’s Tear album!).
I used my chatting computer microphone to record some of them so I don’t forget their melody because I haven’t known how to use notes. I uploaded some of them to a virtual platform for artists and then this guy, Omri Lahav who also used this platform, found my music and liked what he heard.
He tried to help me create a playback for my song Black Light, but being 13 in 2004 had my parents worried about my interactions with “strangers from the internet” and we ceased communication.
About 8 years later we resumed contact and he invited me to his home studio to record a couple of songs. We’ve had an amazing synergy and it was then when I told him,  “We’re going to make a full album”.  It was the beginning of my career as a musician.

How did you meet the members of your Soul Torture and how did you become the lead singer?
My first released single, Vanishing was a great first release and it had me become known in the Israeli metal scene.
Taras, the founder of Soul Torture took notice and asked me about a collaboration. He sent me the song A Blessing in the Moor which I absolutely loved and so I agreed to sing in it.
After it was recorded and as we were working on its music video, we saw that we work well together and recognized the opportunity. We had a shared desire to have me join their band as the lead singer, and so I have. 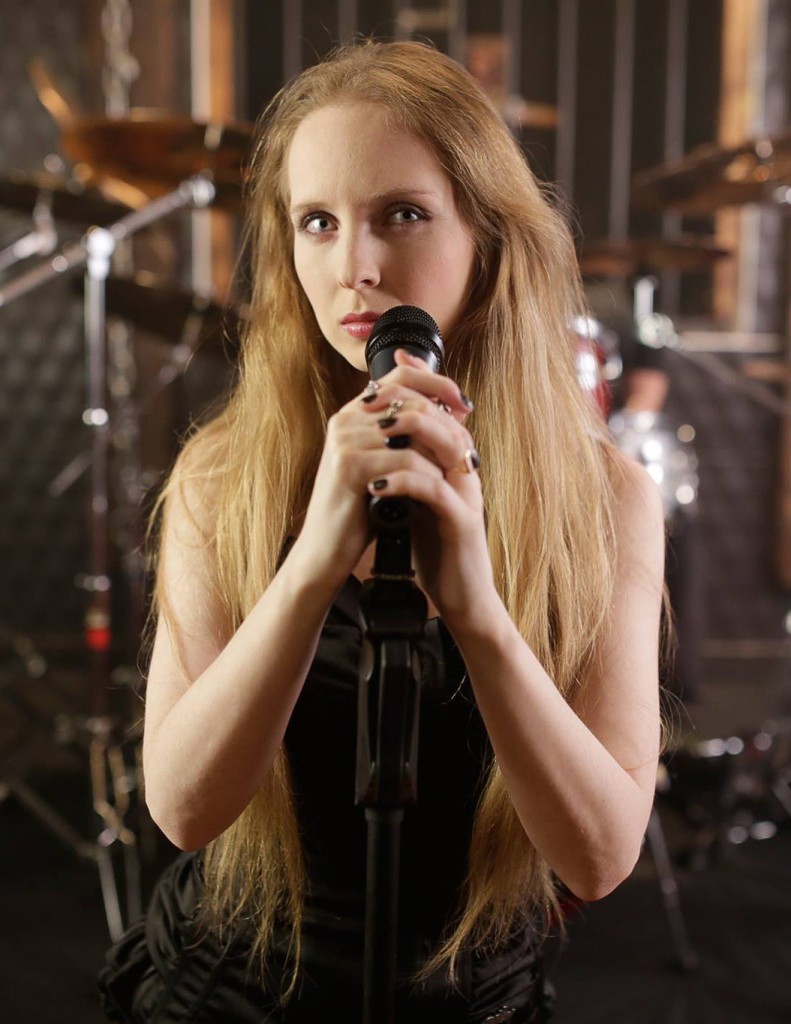 What reactions do you get in connection with your music in your country and worldwide?
Interestingly, I find a great amplitude in people’s reaction to me and my music. Most of the reactions I get are extremely positive and heart-touching, but there is a small percentage of people mainly in Israel who go out of their way to try really and balance the feedback I’m receiving by actively hating all that is related to me.
I used to take it very personally but today I’d worry if it stopped.
The music I work on these days is so bizarre that I am hoping for an even greater amplitude in people’s reaction to my art, for that means I have managed to create something new that stirs people’s emotions.
I personally shipped my album to almost 30 different countries worldwide, but other than Israel it seems to be most popular in the U.S. and Germany.

What is your best experience with your band so far?
I think the A Mortal’s Tear album release show was a great milestone! It was my first production and first Infy gig, and I didn’t know if it was going to end in tears of joy or despair but it had to be either one! I was very excited and rehearsals with my band were then still alien to me and I was super nervous and it I recall it being difficult for me. But the gig sold out, the place was packed and the energies were so high it was electric! No one knew what to expect and the event was a great success.

Did you have funny and/or strange moments during concerts?
I learnt the hard way not to perform with heels- I started headbanging when I literally fell on the crowd! Thankfully they pushed me back up hah.
On my Winter Mindfuck gig, I thought to try and interact more with the crowd by talking, and so I started telling this joke when someone from the crowd shouted that he wants me to sing. I panicked and I forgot to get to the punchline which made it appear as if I was just talking some weird stuff for a couple of minutes without a point. I only realized it after the show was over.

What can you tell us about your personal life? What do you do for a living? Have you studied something?
I didn’t go to the academia as I mentioned earlier. I run a video production company with my boyfriend.
What are your plans for the near future?
Oh so much music!
I started working with a new producer, Adi Almagor on new music which is by far the craziest I’ve done. A progressive fusion of tribal and shamanic tunes, influences from various cultures with musical genres from classic to electronic, rock & metal, pop hooks, R&B and even a little rap!

On September I am travelling to LA to hook up with Omri Lahav once more to finish a few really amazing songs we started working on when he still lived in Israel.
So the plan is- a lot of new music, each to be released with a music video and seeing how fast we work- I think it’s safe to say that an album is due for 2018!
And of course! Soul Torture have already started recording our album, so another album is due for 2018! Woohoo! 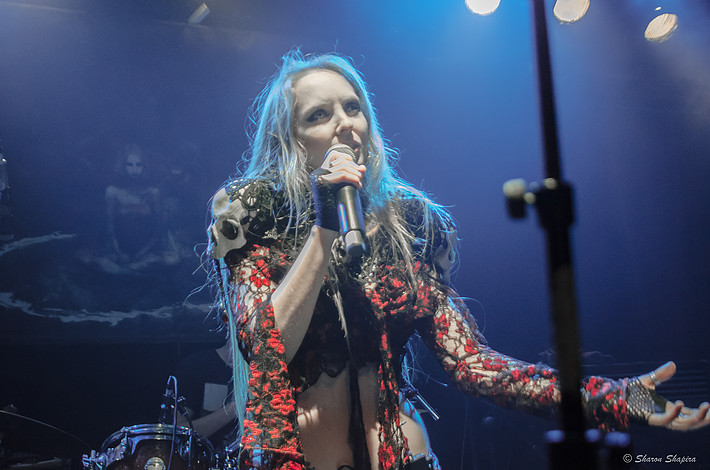 Date and place of birth: 20.2.91 Amsterdam, The Netherlands

Hometown: Born in Amsterdam, The Netherlands, grew up in Kibbutz Yotvata, Israel

Eye color:
A yellow sun in a field of changing blue/green/grey

Have you got brothers of sisters?
I have a sister who is 7 years younger than me.

Hobbies: I love dancing, cooking, computer RPGs, recently I fell in love with playing the didgeridoo and much more! But my favorite other than singing, writing, making music and performing, is going out on trips.

Drink: I really want to say my home made coffee, but the truth is I like water even more.

Movie: Too many, really!

Singer/Band: That changes literally all the time. My latest obsession is Lana Del Rey.

Soul Torture song: Yikes! There are so many songs I am excited about in the upcoming album! Mmm possibly a one called “Your Highness”

Favorite song from your solo project: From A Mortal’s Tear I love Mindfuck the most, but I love my upcoming ones much more!

Country: I don’t really have a favorite country but I do have a warm place in my heart for my homeland, The Netherlands.

Have you got any pet?
5 cats! Pantera, Geralt, Morrigan, Kerrigan and Lily

Have you got an idol?
Not really

What was the best day of your life?
Hah you’re asking tough questions, choosing one day out of so many! But the first that came to mind is that of my first kiss, which happens to be with my boyfriend to this day!